The mandate of Islam is to force the world to submit to Islam.  Our leaders tell us that Islam means peace. But lying about something does not make it so.  Islam means submission. Islam opposes free speech, free thought and human rights. 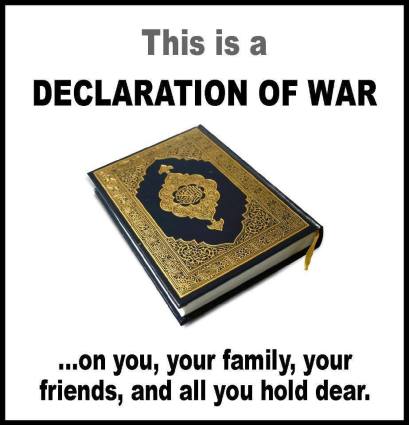 Sharia Law is the codification of the Quran.  The Quran is the holy book in Islam.  Sharia mandates the stoning of women for adultery or being raped, it requires the amputation of limbs for theft, the hanging of homosexuals and death to anyone who dares to leave Islam.  Islam is the religion of approximately 1.5 billion people on the planet at this time.  According to the Pew Forum, when polled the majority of Muslims believe that it is at least sometimes okay to kill innocent civilians in the name of Islam.

US President, Barack Hussein Obama has said, in response to the continuous killing of civilians in the name of Islam that, “No faith teaches this”.  However, Quran 9:5 says to Muslims, with regard to the unbeliever, to “kill them wherever you find them”.  Obama can lie to himself, he can lie to appease and he can lie to those who place their trust in him.  But facts don’t lie.

Fortunately, most Muslims do not actually follow the Quran.  This might be due in part to the fact that about 2/3 of Muslims cannot read or write.  Or maybe they are just humane enough not to harm someone just because their holy book says to do so, on page after page after page. Although the Quran, in chapter 4, commands a man to beat his wife, most Muslim men do not. However, still a significant percentage do.

Religion is an attempt to institutionalize one’s relationship with the Divine. However, when one reads the Quran it is clear that most of the passages do not deal with Allah, the god of Islam. Rather the book is obsessed with its own author, the “prophet” Muhammad. It is also very preoccupied with what to do with the unbeliever, how to enforce rules and how to engage in warfare. There is a strong argument to be made that Islam is first and foremost a tyrannical political system, then a brutal legal system with some religious overtones here and there.

Millions of Muslims have taken to the streets, over the years, to protest against Israel. And yet their silence in protesting against Islamic terrorist organizations, such as ISIS, Hamas, Hezbollah and Al Qaeda has been something like a tumbleweed blowing in the breeze to the sound of crickets. Millions of Muslims have protested against images drawn of their prophet or words of criticism against their belief system. They demand respect for their doctrine while often offering extreme intolerance for other belief systems. 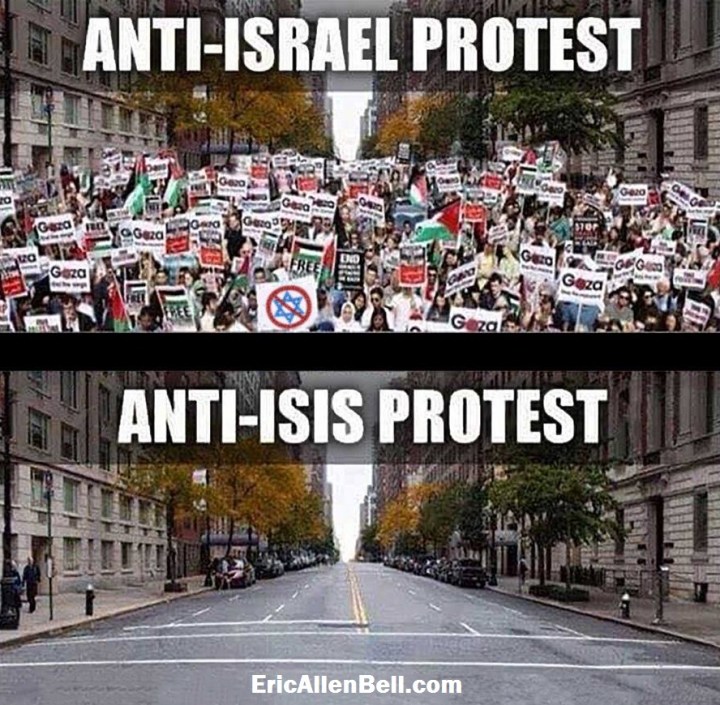 In Islam murder is not the worst offense, but rather insulting Islam is the worst of all sins. The Quran warns against critical thinking and warns the believer not to take the unbeliever as their friend. In Islam a woman is worth half of a man, her inheritance is just half and her testimony in an Islamic court is worth only half of a man’s testimony.

Today ISIS, who prefers to be called “The Islamic State” is spreading their religious doctrine through violent warfare. And former US Secretary of State, John Kerry, tells us that “there is nothing Islamic about the Islamic State” even though the way that Islam was first spread is nearly identical to how ISIS behaves, as it follows the commands of the Quran without compromise.

So what does this all mean?  Should we all start hating Muslims now? Should the free world deliver it’s value system upon the Islamic world using missiles? Should we repeat the holocaust of the 20th Century and dehumanize an entire group of people? Herein lies a problem that gets to the core of why human beings are stuck. We seem to only know how to solve problems in such a way that creates more problems.

If I were to hate Muslims then I would be confusing a belief system with a human being. History has shown us that confusing human beings with belief systems is a violent cycle which repeats itself. The truth is that nearly every one of us is the product of conditioning – the conditioning of our parents, of our culture of the society we are born into. Most of us have been given multiple opportunities to take a step back, to snap out of it, or at least to question whether what was put inside our head is something we want to keep there. But instead we tend to prefer to keep our blinders on. And this is not a problem that is unique to Muslims.

I do not excuse those who would follow the Quran literally. But I am often puzzled by my own tendency to tolerate their intolerance, while hating their hatefulness, to fear their fear mongering. Islam must not be tolerated, but this does not mean I must hate all Muslims. I simply do not tolerate those who promote Islam.

Islam will outlive me.  I can fight it.  I can even define myself as someone who fights and it and make a career out of this. And yet the world will go on being the world, a place where life eats life and tribes go to war. We can fight or we can enlighten and there is a time for both.

No one suffers more under Islam than its followers. The enemy of Islam is information. And we are living in the Information Age. Hatred will rot you from the inside. Compassion will open up your heart and knowledge will set you free.

I do not buy the belief system called Islam. But I don’t buy the cover story of those who try to define themselves by it either. We are all strangers in a strange land, passing through forms and impressions, looking towards – and running away from the question – Who am I?

With about 98,000 Twitter followers I have been banned for criticizing Islam!